Below, you can delve into all that we’ve been up to this past quarter.

As of the end of Q4, Fastly now operates 57 POPs worldwide. We made additions and enhancements to POPs across three continents, enhancing performance and scalability for our customers and their users:

The addition of our new POPs, paired with the network growth at existing POPs, yielded an increase of 11 Tbps of new edge capacity in Q4 — bringing our total connected edge capacity to 37.5 Tbps.

Fastly is now present at 67 Internet Exchange Points (IXPs). We joined the following new IXPs this past quarter:

On November 20, we announced several use cases for our edge compute technology — which empowers businesses to innovate, as we move data and applications as close as possible to their end users. We surfaced real-world customer examples from today’s leading brands, like Reddit and HotelTonight, that have built their own logic and applications on Fastly’s edge cloud platform. These use cases involve features like edge redirects, content targeting, A/B testing, edge authentication, and feature flagging.

Fastly Labs is a hub for the developer community at large to access Fastly’s latest projects and innovative ideas, aimed at honing in on research that will help solve the internet’s big challenges. Fastly Labs also as an interactive space for feedback and safe experimentation with edge innovation.

The first three projects to kick off Fastly Labs are:

We recently released logging endpoints for Honeycomb and Splunk into GA, as well an update to Google BigQuery — all of which gives businesses more control, and makes it easier to view traffic, understand site health, and make changes quickly. We also released into GA our logging endpoint integration with Azure Blob Storage, which is optimized for storing massive amounts of unstructured data.

Part of this work involved performance enhancements to the logging pipeline, which will help us scale as our customers continue to utilize our real-time logging capability. This increases the number of integrations popular with enterprises, bringing the total number of endpoints to 17. 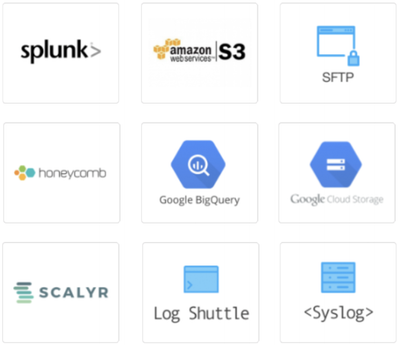 We officially released a new Live Event Monitoring Service, which lets customers reserve support resources so they can proactively monitor high-value events (like awards shows, sports games, holiday and flash sales, and product or service launches). Customers can purchase the Live Event Monitoring Service to leverage Fastly resources as an extension of their own teams, with proactive monitoring, alerting, and troubleshooting throughout their events. This results in a smooth operational experience for our customers, and an optimal experience for their end users.

Navigation enhancements: In November, we changed top navigation of our UI to combine something confusing to users (real time vs. historical stats) — and make more effective use of precious real estate. The content and functionality haven’t changed, but we improved navigation to make it easier for users to do what they need to do.

Quick config: Quick configs are a reusable design pattern, exposing key features of Fastly’s platform in a one-click format that makes it easy for customers to use. Our Design team has been optimizing the use of quick configs to balance the flexibility and customizability of our platform with the need for something simple and easy-to-use.

Below are some key highlights from the quarter, but you can also visit our our documentation changelog for a complete list of updates.

Summary Product Definitions: We recently published plain-English definitions of Fastly’s key product offerings and will continue to update the list as new products get released.

Varnish Control Language (VCL) reference updates: Since its launch earlier in 2018, we’ve continued to improve and add to our VCL language reference. We’ve added reference material for many undocumented variables and functions and continue to add examples for them. 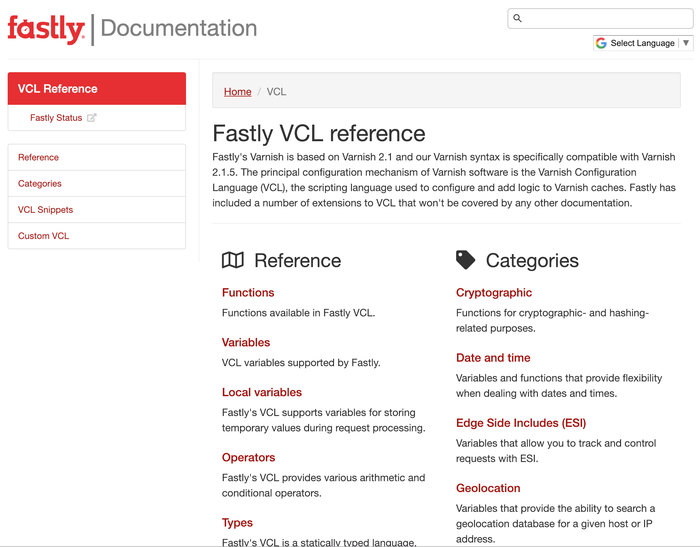