In Q4, we added several new features and expanded our network before taking a much-needed break for the holidays. New features include enhancements to video capabilities (HEVC), security (WAF update), and user management, and more, plus new POPs in South Africa, Japan, and North America. Read on to learn what we’ve been up to last quarter.

This quarter, we continued to build powerful POPs in well-connected locations, launching three new POPs in December alone. We expanded our presence in South Africa by launching a new POP in Cape Town, and added a POP in Columbus, Ohio, driven by massive growth of data consumption around the traditional core hubs of the internet. Our new 100GE-enabled POP in Tokyo, Japan provides additional capacity to support our customers’ growth in the region.

We upgraded our Dallas, Texas and London City, UK POPs to our 25/100GE architecture which provides more cache capacity, more server capacity, and far more network capacity. Our deployment in Osaka, Japan was overhauled with new cache servers and fresh networking gear, and we added server and cache capacity in our existing Tokyo and Stockholm POPs.

As part of our ongoing effort to scale with care, supporting our customers as they grow, we’re pleased to share we’ve hit 20 Tbps of global edge capacity. We’ve doubled our edge capacity in less than 10 months, a culmination of hard work, adopting a new 25/100GE architecture, strategic POP deployments, and an endless series of POP upgrades. 20 Tbps is a big number to wrap your head around: if we could pipe this capacity into your home, you could download the entire 600 hour original content catalog of a major US streaming provider in 9 minutes! For the tech savvy, that’s 600 hours at 1080P resolution using an average bitrate of 5 Mbps; roughly 1.35PB in total over 20 Tbps = 9 minutes! 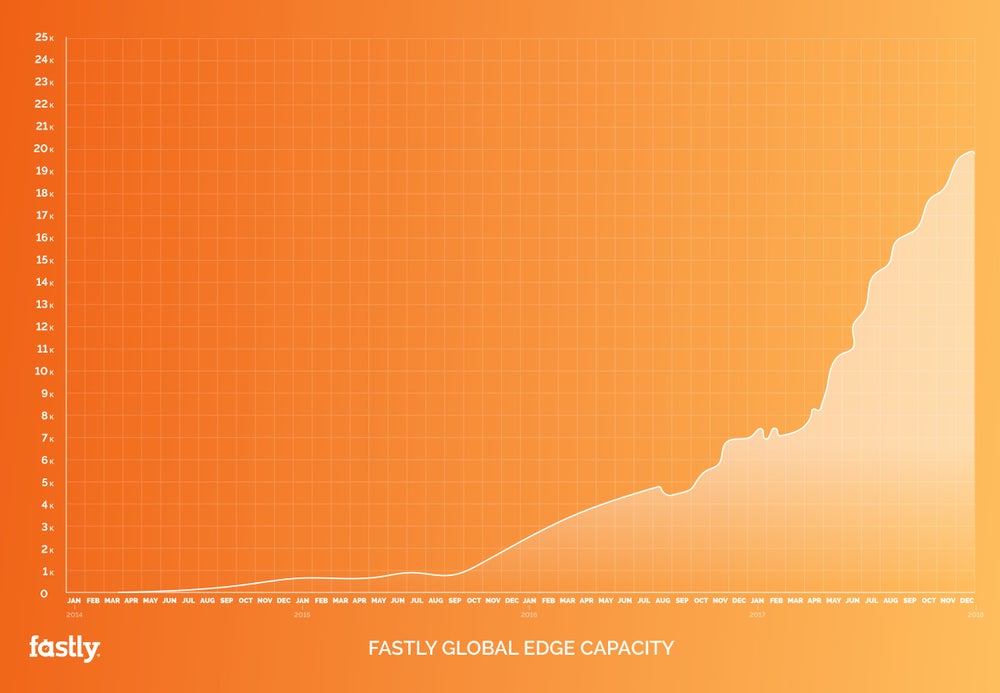 Reduce bandwidth by 50% with HEVC support

At this year’s WWDC, Apple announced support for High Efficiency Video Coding (HEVC or H.265) video codec in HTTP Live Streaming (HLS) with iOS 11. HEVC is a next-generation codec that can reduce bandwidth by as much as 50% without compromising video quality. This helps online video distributors add Ultra High Definition (UHD or 4K) content without the proportional increase in bandwidth compared to today’s 1080p resolution content.

Apple will only support the HEVC codec with the fragmented MP4 (fMP4) container for video segments. Back in Q3, Fastly’s On-The-Fly Packager (OTFP) for video on demand added support for fMP4, and with this release, OTFP will also support HEVC codec packaging in fMP4 container. This provides customers an option to deliver UHD content to their subscribers without changing their distribution workflows. In addition, OTFP also supports the HEVC codec for MPEG-DASH. Check out our OTFP documentation for more information.

In response to recent threats, we added new rules to protect Fastly WAF customers against Apache Struts vulnerabilities that caused the infamous Equifax breach. We also released a global update to the latest OWASP 3.0.2 and Trustwave rule sets, which provides and increase in rule accuracy and a reduction in false positives. More information can be found on the rule set maintenance page in our WAF rule set documentation.

Fastly Image Optimizer now supports delivery of PNG images, which can be optimized to 8-BIT while maintaining any transparency in the image. This optimization can reduce file size often as much as 70% with no visual difference in quality. Please see our image optimization documentation for more information.

In an effort to give you more control over who can make changes to your services, we’ve moved a new set of user management features into general availability. Role-based access control (RBAC) 1.0 allows your teams to expand access for the management of Fastly configurations while ensuring that users only have access to the permissions they need. This level of control is particularly useful for large teams managing multiple services. Check out our RBAC documentation for more information.