What is a DDoS attack?

Before protecting against a Denial of Service (DOS) attack, you must understand what one is. A DoS attack is a malicious attempt to impact the availability of a targeted system. These systems range from applications to websites or even target end users directly. The target system is eventually overwhelmed by generating an abnormally large amount of packets. A Distributed Denial of Service (DDoS) attack is when the attacker uses multiple compromised sources to produce a volumetric attack.

You can group DDoS attacks based on the targeted Open Systems Interconnection (OSI) layer.  Most common attacks happen at the Network (OSI layer 3), Transport (OSI layer 4), and Application (OSI layer 7) layers.  Few of the many cyberattacks today are more overwhelming and devastating than DDoS attacks. NortonLifeLock calls DDoS attacks "one of the most powerful weapons on the internet"—and for a good reason. These malicious attacks can come at any time and take targeted websites offline, leading to massive service interruptions and substantial financial losses. Worse, the number of DDoS attacks worldwide is rising, with recent research depicting a 29% year-on-year increase in Q4 2021. 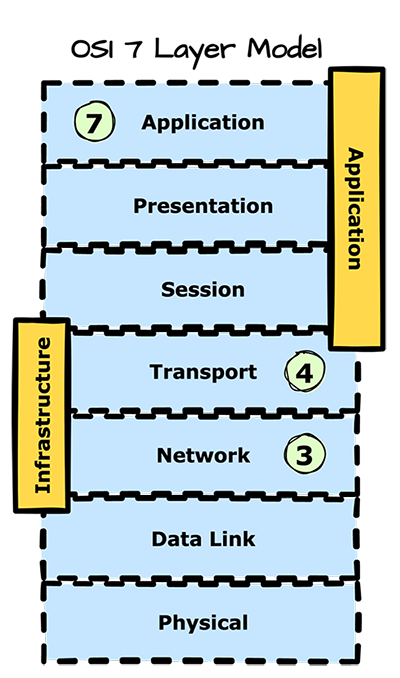 Layers 3 and 4 are the infrastructure layer. Common DDoS attack vectors at these layers include SYN floods, UDP floods, and Internet Control Message Protocol (ICMP) attacks. Layer 3 is the network layer responsible for deciding which physical path data should move through the network. Layer 4 provides data transfer between hosts and ensures data integrity and completeness of transfer performed by the Transport Control Protocol (TCP). Attacks targeting these two layers generate massive traffic volume and aim to overload the network's available capacity or group of hosts. The good news is these styles of attacks have clear signatures and are easier to detect and mitigate.

What is a layer 7 DDoS attack?

Layer 7 is the application layer. These attacks tend to be less common, while also being more sophisticated. From a volume standpoint, these attacks are less about a sudden influx of traffic than infrastructure layer attacks. Still, they target critical vital parts of the application, negatively impacting the performance of the target. A real-world example of this attack is to flood an application login page or target an exposed API with an expensive search request, resulting in a degraded experience for the end users. Reactive remediation of these attacks is costly. Small to medium-sized businesses (SMBs) spend an average of $120,000 restoring service and managing operations during a DDoS attack.

How can you protect your applications?

When fighting against today's highly sophisticated DDoS attacks, an ounce of prevention is worth a pound of cure. So make sure that at any given time, your organization is adequately prepared for, and can handle, much higher volumes of server traffic or network requests than you need. The best time to take action was yesterday; the second-best time is now.

If you need a hand fighting DDoS attacks, Fastly can help. Our high-bandwidth, globally distributed network can absorb DDoS attacks. Fastly's entire network acts as a DDoS scrubbing center, so you never have to sacrifice performance for protection. We allow you to respond in real-time, filtering out malicious requests at our network edge.

Watch this video to get a feel of how our high-performance DDoS mitigation service works, and try Fastly for free today!

Travis is a Principal Sales Engineer at Fastly. He has been part of technology for over two decades, working in government, healthcare, commerce, and media industries. With a focus on helping make the web faster, more secure, and more reliable. He works with global companies to evangelize Fastly's increasing product capabilities.