Is it time for ECDSA certificates?

Evolution can be hard. We often meet any kind of change with resistance, and say things like, “Don’t fix what isn’t broken,” or, “There’s nothing more permanent than a temporary solution.”

This is nowhere near the perceived “double the security” that most people think they get when moving from RSA-2048 to RSA-4096. However, the real problem is that this marginal security enhancement comes at a significant performance cost.

In contrast, Elliptical Curve Digital Signature Algorithm (ECDSA) certificates offer a better security posture, and better performance. RSA certificates are more widely adopted than ECDSA certificates. Is it time for your organization to make the change?

Not quite. Despite computers getting faster each year, longer RSA key lengths still demand processing power. While this isn’t a big concern for normal traffic, when we talk about the amount of traffic needed to cause a Distributed Denial of Service (DDoS), your server spends all of its time decrypting the client random (pre-master secret) key sent by the client when establishing a TLS connection.

Mitigating this type of attack is very difficult because the only data point you have for creating a rule at the transport layer (L4) of the OSI model is the origin IP address. If the attacker is using enough unique origin IP addresses, monitoring the central processing unit (CPU) utilization is key to determining if you are under attack. Rate-limiting the number of TCP connections you allow would help mitigate this type of attack, but it would not discriminate from real traffic to your site. Because handshakes using ECDSA certificates are more efficient than using RSA certificates, these types of attacks are less likely to be successful.

ECDSA certificates are here to stay

What is the alternative? Elliptical Curve Digital Signature Algorithm (ECDSA) certificates provide both the security and performance you need. While NIST accepted ECDSA as a standard in 2000, ECDSA certificates have had a slow adoption rate until recently. Again, change is hard – and RSA was working well. But while ECDSA certificates were not widely implemented at first, most clients now have support for ECDSA certificates. 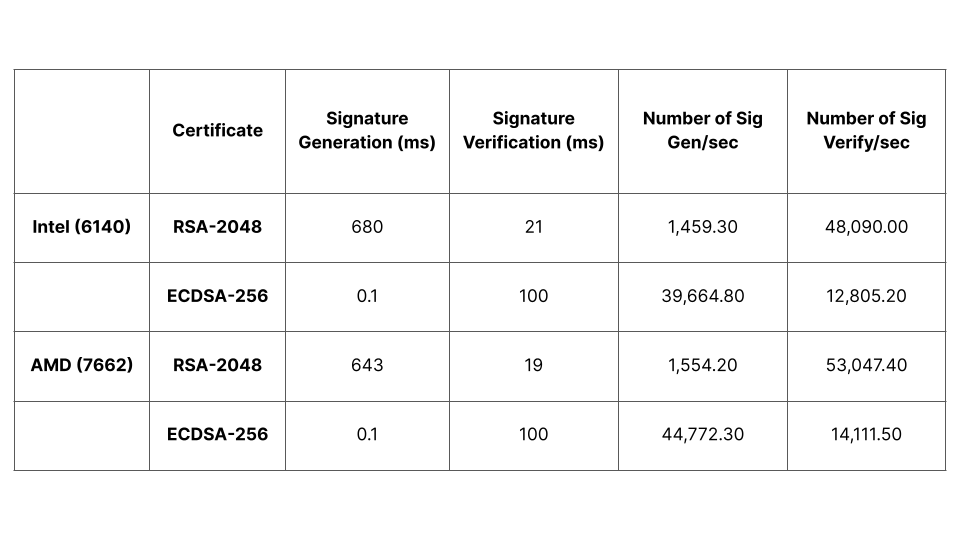 Findings in an early study in 2015 on the Performance and Security of ECDSA corroborate this principle (although the overall speeds are slower due to 8 years of hardware and software advancements). 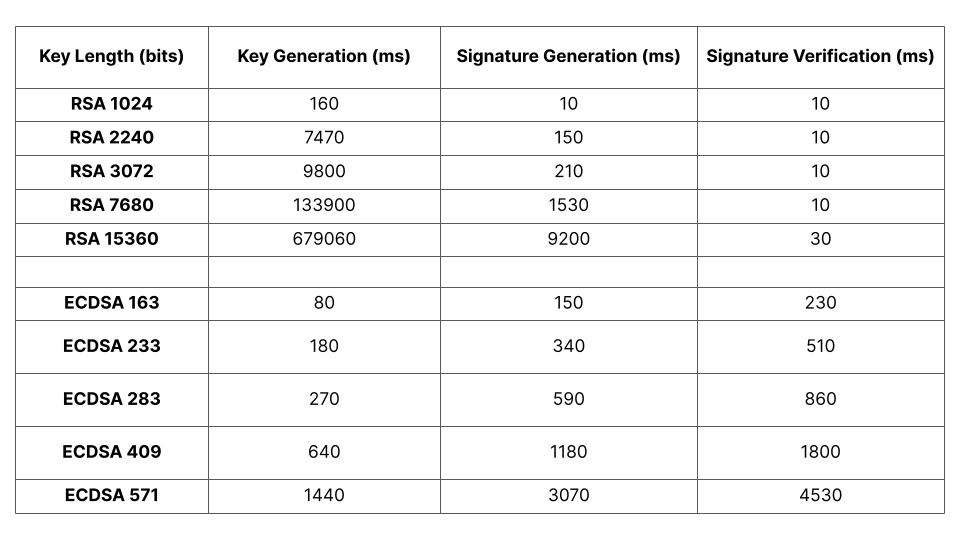 As you can see from the chart above, RSA has a very slow key generation rate, but an extremely fast verification rate. As key lengths increase, the signature generation is slower for RSA as compared to ECDSA with similar security. Key generation speeds may not seem important, but as ephemeral certificates become popular, and you are managing hundreds of thousands of certificates, properly rotating your keys, even slight differences add up quickly.

RSA-2048 may meet your requirements today, but NIST predicts that by 2030 those certificates will be too weak. If change is hard for your organization, start having the conversations now. We hope the data and resources in this article empower you to hold effective discussions with your leadership team. When you are ready to make the switch, Fastly is here to help. Reach out to our experts for more information.

Shane Burgess is a Senior Product Manager on the Security Product team, where he works on TLS connections and certificate management. He has over 8 years of cloud infrastructure experience where he has worked on products for ecommerce, domain registrations, TLS certificate management, DDoS protection, and compliance. When Shane is not at work, you can find him in the kitchen, or working with his hands, fixing or improving things, or on the ice at the local hockey rink.